ExCdnSoldierInTx said:
Again, we alreD
ady have thr CZ75, which is basically a perfected HP, and they sell like hot cakes. Can the market even handle another SA 9?
Click to expand...

Interesting comparison. Quite a bit of personal opinion in there, but that’s how we choose. I’d actually like to try the new BHP and see how it is from the factory with the mag interlock deleted.
I never noticed much of a size difference between the two, but it certainly matters to some. My carry pistol is a 75 Compact, so it’s smaller yet, more Commander sized.
we’ll see….

I shit you not.

W.E.G. said:
My son gave me a COVID test kit for Christmas.

I shit you not.

He must love you very much, you are a very lucky man. I got a visit and mini donut from my daughter, and a brick* from Mom, true story.

*It is a contribution brick with my name on it on a walkway at her old folk’s home.

Feedback: 68 / 0 / 0
Those things must be more popular than a hooker on double coupon night. The LGS's around here haven't even been able to get a whiff of them yet.

One of the joys of living in Podunk Arkansas I guess.

If not which has the higher value ¿?

If not which has the higher value ¿?

Hard to say without seeing the high power. 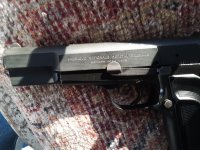 Feedback: 24 / 0 / 0
For the same $700+ price you get worn out surplus HPs these days I'd rather have the Springfield SA35. They are OOS everywhere, either because they are ironing out teething issues before making next batch, or because of supply chain issues. Either way it is in my bucket list together with a Rhino 200DS (can't find that one either).
M

It is one of my favorite pistols. Bought it for less than $400 then, and it never disappointed me.

Feedback: 189 / 0 / 0
With everything I've read, I'll pass on the SA clone and just keep my '87 FN MkII in the safe and this straight shootin' Israeli Ex-Police FN on my hip. 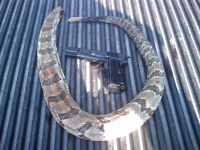 ExCdnSoldierInTx said:
Again, we already have thr CZ75, which is basically a perfected HP, and they sell like hot cakes. Can the market even handle another SA 9?
Click to expand...

Apparently it can as FN America is now making a new HIPOWER. I have been trying to find a SA-35 since they were first announced without any luck. I wonder if FN America was making the Hi-Power for Springfield Armory. If they were, they just screwed them.

My hands are smaller so the trigger reach is better for me on a BHP.
Click to expand...

Feedback: 16 / 0 / 0
Interesting. I carried a Hi Power for years. The 75 compact put it in the safe. For me, it’s superior in every way.
The one thing that irritated the crap outta me about my Hi Power was the military trigger and it’s unpredictability. Some days it was beautiful, others, it was like pulling through sand.
The 75 compact with some work did away with that forever.
They say when you find what you like, stick with it. Well I found mine. And I’m sticking with it.

Location
Foothills of the Blueridge Mountains

Feedback: 68 / 0 / 0
Didn't get all the fingerprints wiped down of the high gloss finish but this is picture of my stunning Belgian Hi Power:

This Canadian Inglis model was purchased off a WW II veteran who took it from a German he killed toward end of war. Most likely had to have come off a Canadian special ops type after D Day. This was before Canadian government dumped a gazillion on U.S. civilian market and few had held an Inglis much less owned one so paid the gentleman a fair price (way more than he expected as just thought he had a generic Hi Power) because he and wife needed the money living off social security.

One of my generic Portugese Hi Powers when just need to make empty 9mm cases using a classic at the range.

Over the years have purchased quite a few Hi Powers as children of John Browning and their historical importance. The only Hi Power ever carried much is my Tactical 40 in 40 Smith but recently discovered these along with all my Hi Powers value has gone astronomical compared to purchase prices. Always being a 1911 guy had to be a deal to buy "women's guns" which 9mm is what always gave wife to carry. Have an interesting story about a cousin who carried a Hi Power as his duty weapon till he swapped to a 1911.

First this was the 1980s when 9mm ammo was nowhere near its current ability to anchor man size targets. Always remembered my ROTC regular Army advisor saying always had to shoot a Vietnamese two or three times with a 9mm but with a 1911 put shot center of mass and transition to next threat. Always joked with cousin (ate breakfast in our family restaurant every morning) about carrying a women's gun to which opened good natured banter. Several years of this and one morning he has black eye, bandages on his head, walking with limp and a 1911 in his holster.

Asked him what was up with the beat down and 1911 to which he replied had a guy engage him in fist fight after a DUI stop then stab him in thigh as it continued. Said he backed off, shot the guy twice in the forehead dropping him. Holstered his pistol and as leaned over the dude grabbed him and they were rolling in the dirt and said he finally stopped the fight with several blows using a five cell Maglite to the guys head. Said perp had two bullet holes in forehead and two exit holes in rear of head which he now EMTs could understand guy was alive, much less requiring restraints to keep him in gurney.

At hospital doctors were baffled till did x-rays then shaved guys skull to try and trace damage plus survival. Both rounds hit thickest part of forehead skull area and instead of passing through skull and brain they just turned and followed path around his skull under the scalp till they exited somewhere just behind his ears. Cousin was beat up badly, not feeling well from knife in his thigh and said "don't ever say one word about a Hi Power again" pointing to his new Colt 1911. Apparently bullets knocked guy out and he called it in as perp killed, took his time not wanting to move corpse before investigated but as leaned over to check body for I.D. guy woke, grabbed him and dang near beat him to death with two bullet holes in head.

Give me a 9mm with current Hornady Critical Defense, Critical Duty, Federal HST or similar and same two shots would most likely have sprayed majority of perps brains across grass. 1980s ammo and urgent 9mm defensive ammo has progressed a lot. That said 9mm is still a backup for me but long as I can double tap with my 45 acp 1911s will continue to carry them. Need to pull my Hi Power collection and photograph them all just to make sure have accurate count on my insurance list.
You must log in or register to reply here.
Share:
Facebook Email Link
Top